It’s been quite a while since our last ‘Blue Check Tales’ was posted on the site. In the time between the last one and now, there has been no shortage of current events invoking Blue Check reactions; with happenings such as events surrounding the Royal Family, Trump and his Mar-A-Lago ‘raid’, controversial movies and TV Shows, a 200-year-old flute being, and many others. While we could have realistically made a ‘Blue Check Tweet Gallery’ or a ‘Blue Check Tale’ for each of the events above, they followed a similar pattern to other ‘political’ galleries and tales we shared before. It was hard to decide which ‘event’ to feature above the rest before the discovery of today’s subject. And after seeing what has transpired in the days since, our decision was very easy.

Many of you are familiar with the background of this already so we will keep it relatively simple. ‘Bros’ is a movie that, unbeknownst to us before, debuted in theaters at the end of September/beginning of October 2022. Starring ‘comedian’ Billy Eichner and other somewhat-relevant actors and actresses, ‘Bros’ sought to be a game-changer in the ‘Rom Com’ genre by being the FIRST to feature an LGTBQ couple as the subject. Marketed as “the first gay romantic comedy from a major studio”, co-writer and co-star Billy Eichner made sure his Twitter audience was aware of this fact by reminding them to go see the movie at least 3 times a day in the months leading up to the film.


With a film budget of approximately $22 million, it is estimated that the creators spent between $30-40 million on MARKETING AND ADVERTISING. The hype for the movie was massive and the cast was supremely confident in its success, with the only thing left being actually showing the movie on the premiere weekend.

Per usual, a handful of film critics were able to provide their take on ‘Bros’ just before it was open to the public. And if you have been following along with similar style movies, you’ll know what that entails as far as critic scores. Quite simply, political undertones and social commentary are put first in the 21st Century of film critiquing. If a particular film has a message that’s agreeable or tolerant, the actual quality of it is not a huge consideration. With a film as ambitious as ‘Bros’ tried to be, combined critic scores BELOW 80% would be a huge surprise. And when these scores eventually did come out, nobody was truly shocked.

While the inflated Critic scores were exactly what was expected, we were a bit surprised by some of the high “User Scores” on some of the outlets. With movies like this, generally speaking, a large ‘valley’ exists between “User Reviews” and “Critic Reviews”. On Rotten Tomatoes in particular, this was the 2nd time spotting an unusually high “User Score”, with the other being with the newly released ‘Woman King’ movie. There’s a high likelihood of the reviews being ‘faked’ by the sites them, with the off-chance of this actually being a good film. More evidence was needed before making this determination.

And just like that, we had all of the information we needed to make a determination. Despite the incredibly high user reviews, Blue Check advertising, and other gimmicks deployed by the company, ‘Bros’ had an unbelievably bad opening weekend. Given the Marketing budget and hype surrounding the film, the thought of this happening most likely NEVER crossed the mind of Billy Eichner and others in the cast. But despite it all, here we were with ‘Bros’ and the fanfare that went along with it. Being the heart and soul of the entire operation, Billy couldn’t stay quiet for long about the events that had just transpired.

On the following Monday after the premiere weekend and after reading all of the reviews and reports, Billy Eichner had an official response to the situation. And while the marketing of the entire movie was questionable to begin with, there really weren’t a ton of ‘unforced errors’ made along the way by the cast. By responding to the criticism and comments about the movie, Billy Eichner made perhaps the biggest PR blunder for the film to date, in the form of an angrily-written Twitter thread:

While there’s A LOT going on there, one quote in particular stood out to Twitter:

A quote that ticked off a great number of people of all sexual orientations was also very telling about the attitude surrounding the film. It became clear to everyone that the ‘quality’ of this film never actually mattered and its subject matter was used to ‘guilt’ the consumer. But just for the fun of it, we actually did some math to see how it compared to Billy’s assessment:

While the math on this is simply an approximation, we determined that based on ‘Bros’ ticket sales compared to the population the film tried to appeal to, NO MORE THAN 2% of the LGTBQ Community actually went out to see the film in its first weekend. And the reason why we say “no more than” is because this calculation implies ONLY their community attended, which obviously is not the case and would cause the percentage to be even LOWER! A silly claim that could be debunked in seconds, Billy was simply following the ‘Steps to Blue Check Movie Marketing’ that we see from other films alike.

The classic Blue Check marketing strategy of ‘Vilifying the Consumer’ can be effective in certain instances, but not this one. In one swift thread written out of anger, Billy lost months of goodwill for his mediocre Rom Com that flopped. And while ‘Bros’ can certainly recover and make its way towards profitability, they aren’t on the right track to do so at this time. A lot can change for sure and this tale will only be updated if anything important comes up, but that about sums it for this very moment.


Below, you will find a gallery of over 140 Blue Check Tweets reacting to the film. Feel free to use any and all of these images for whatever purposes you desire. 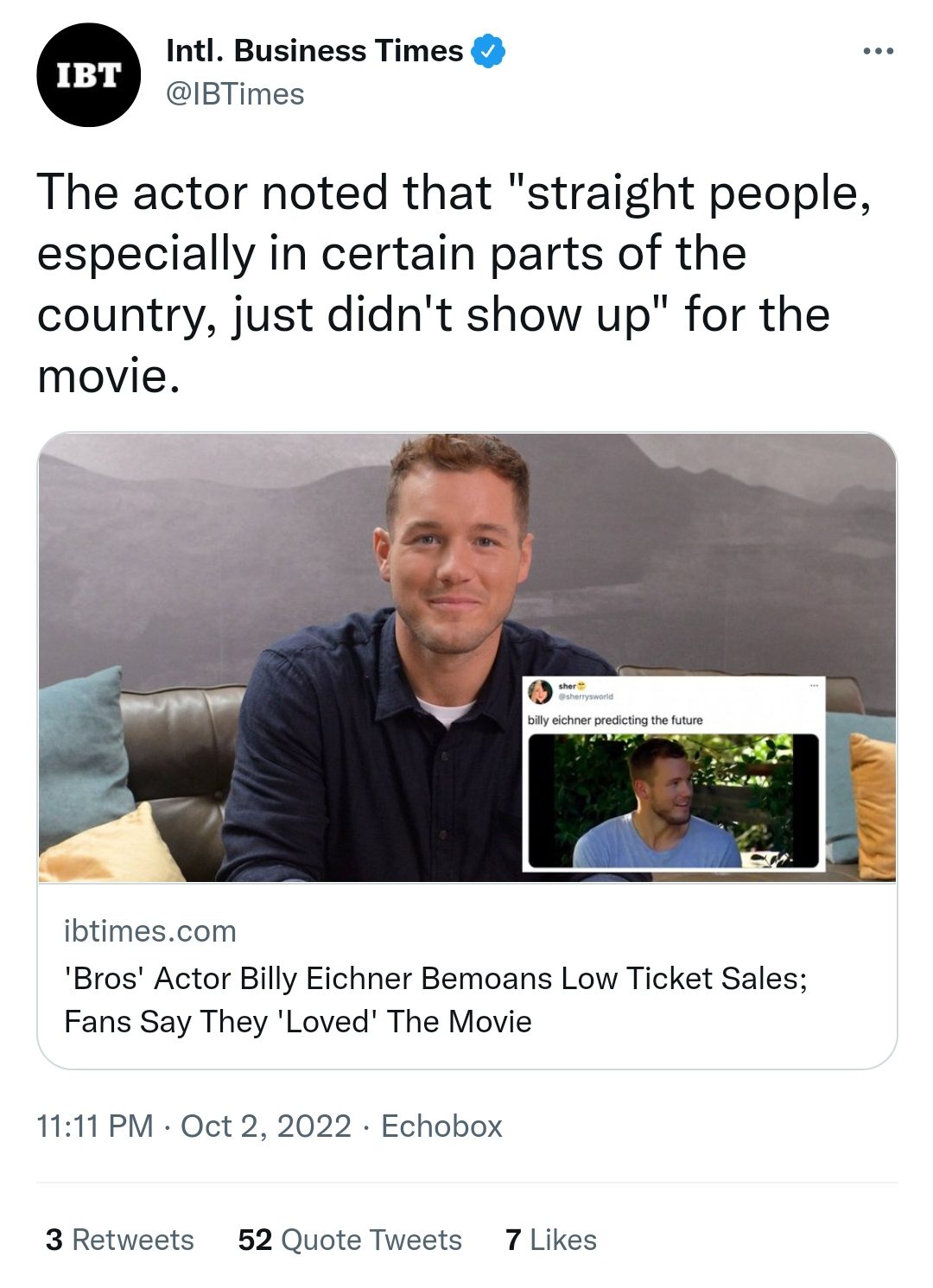 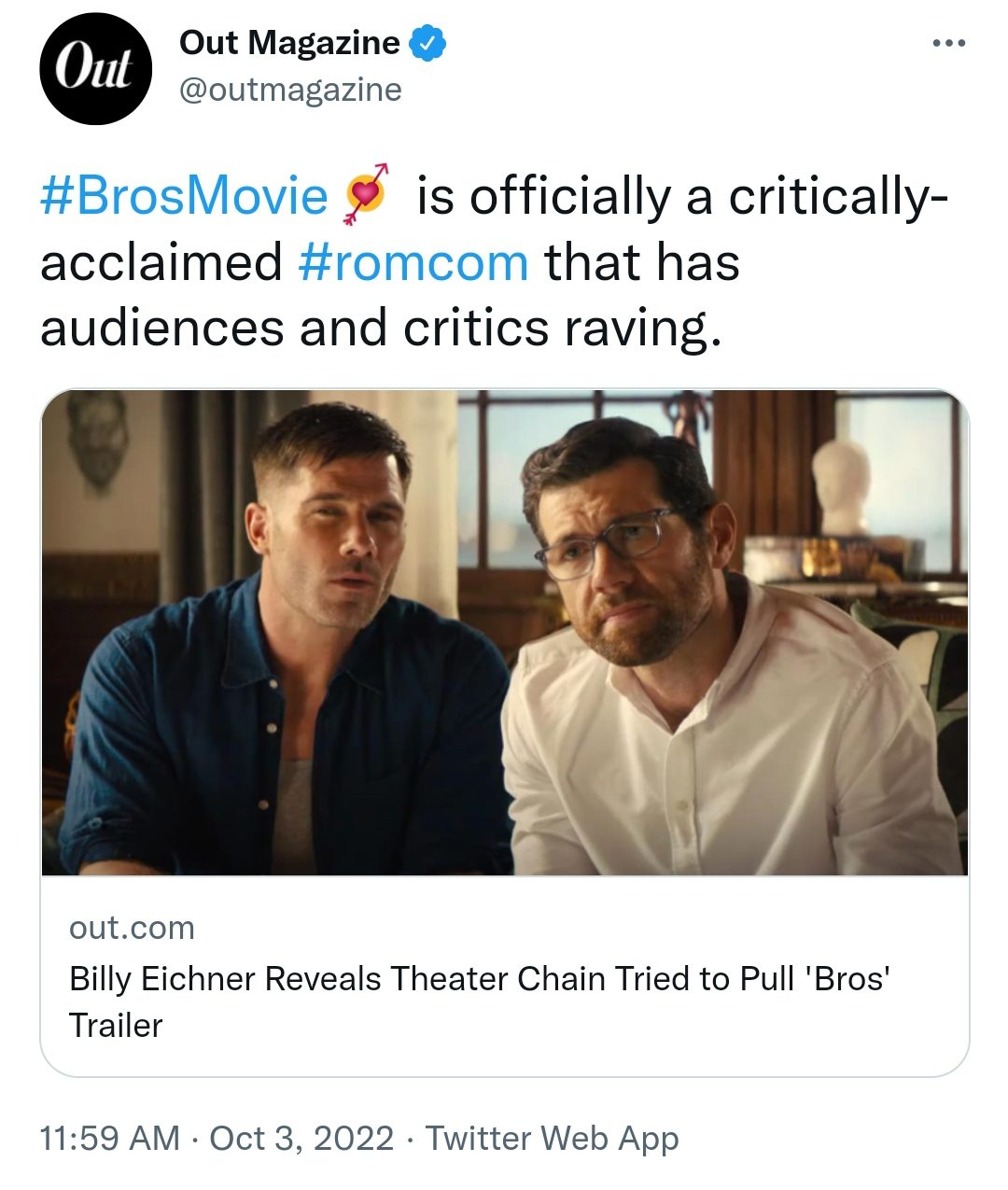 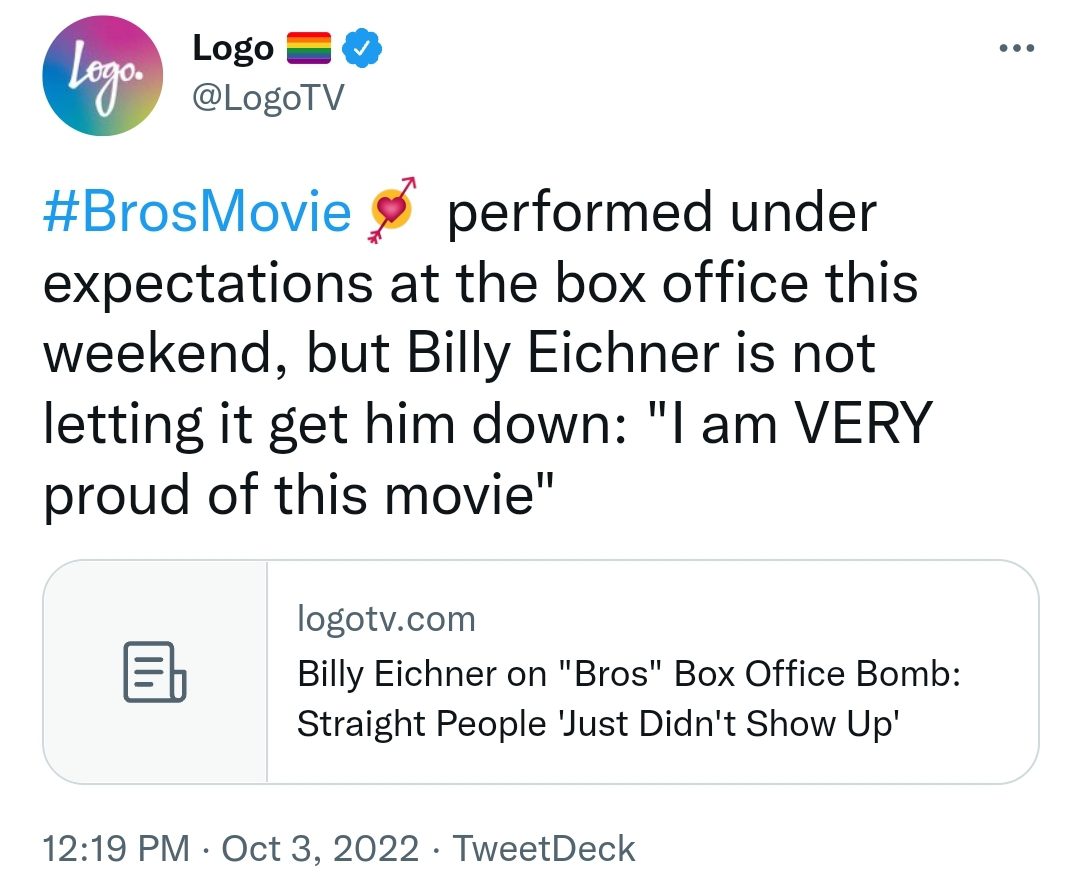 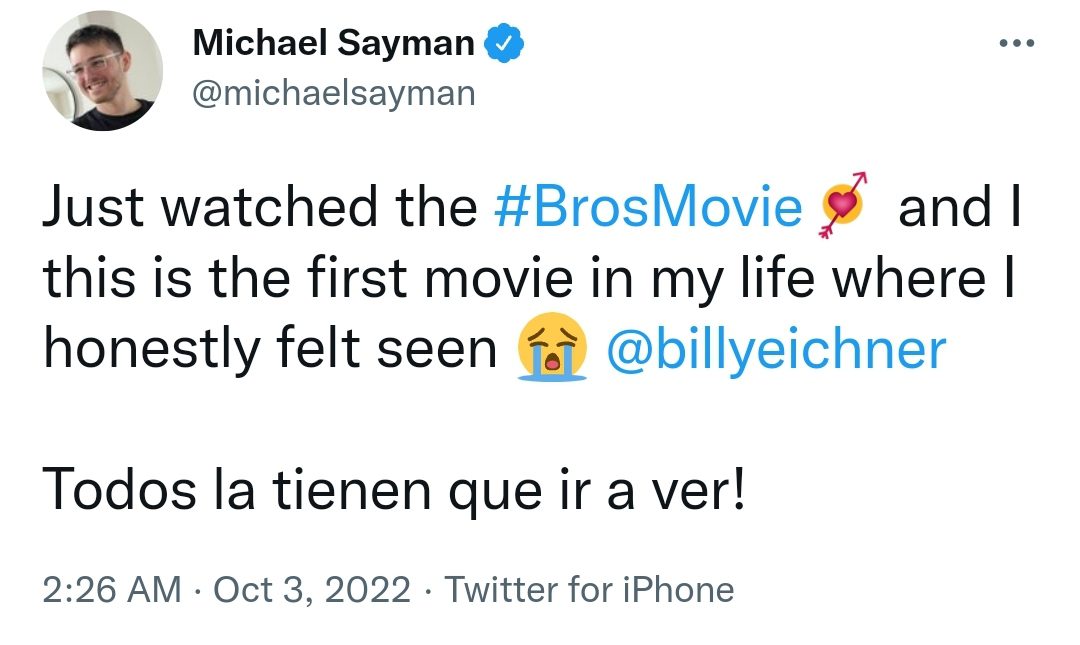 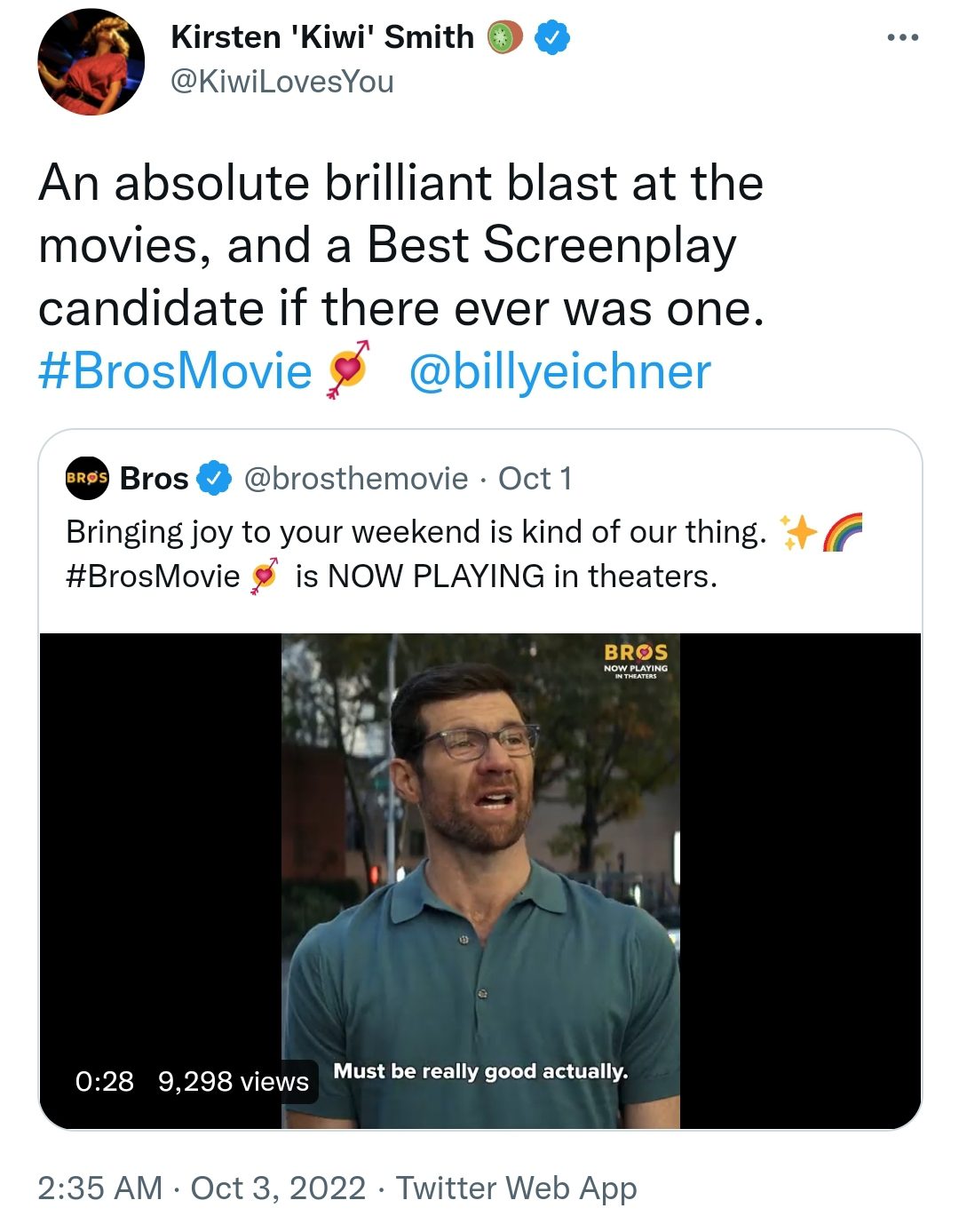 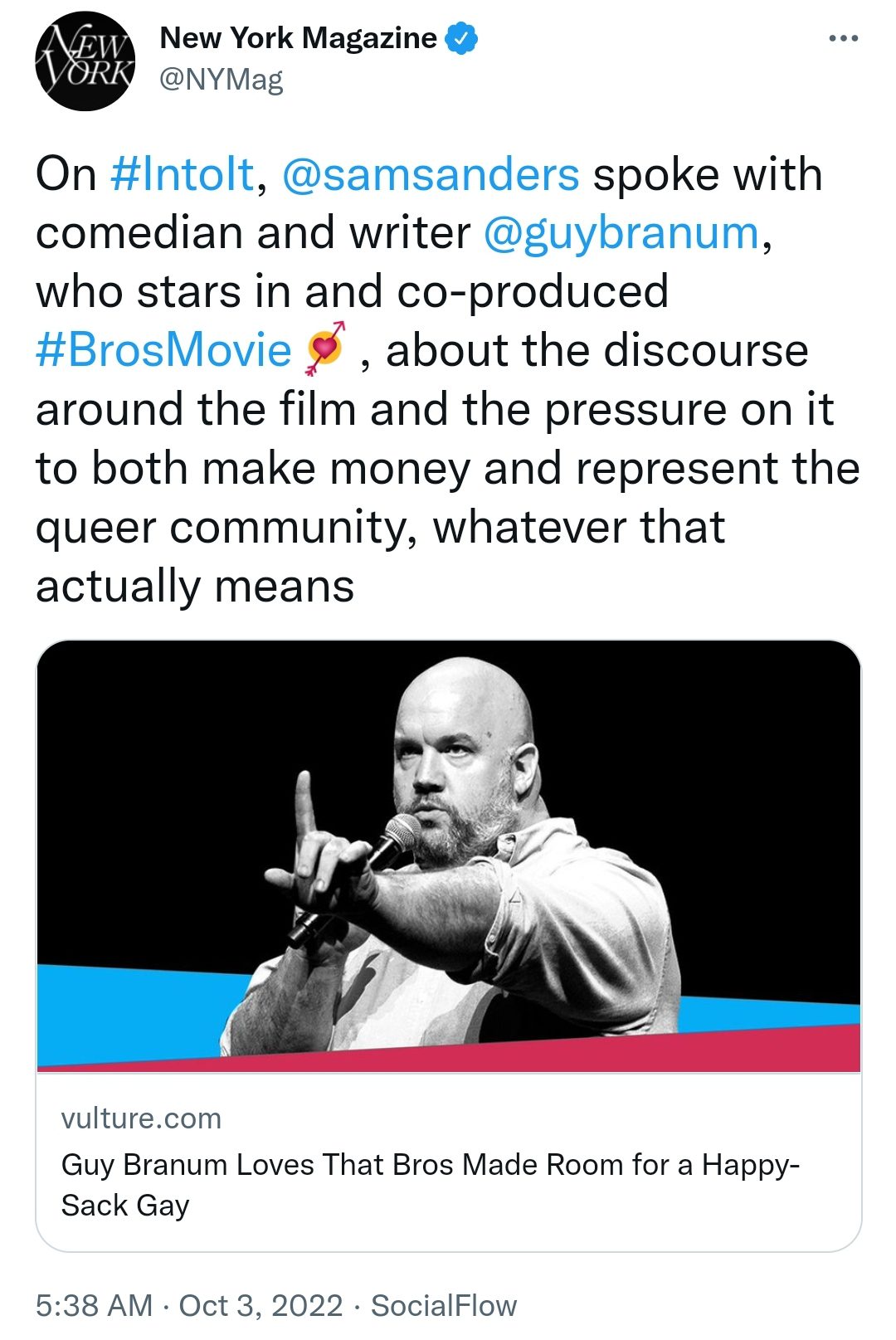 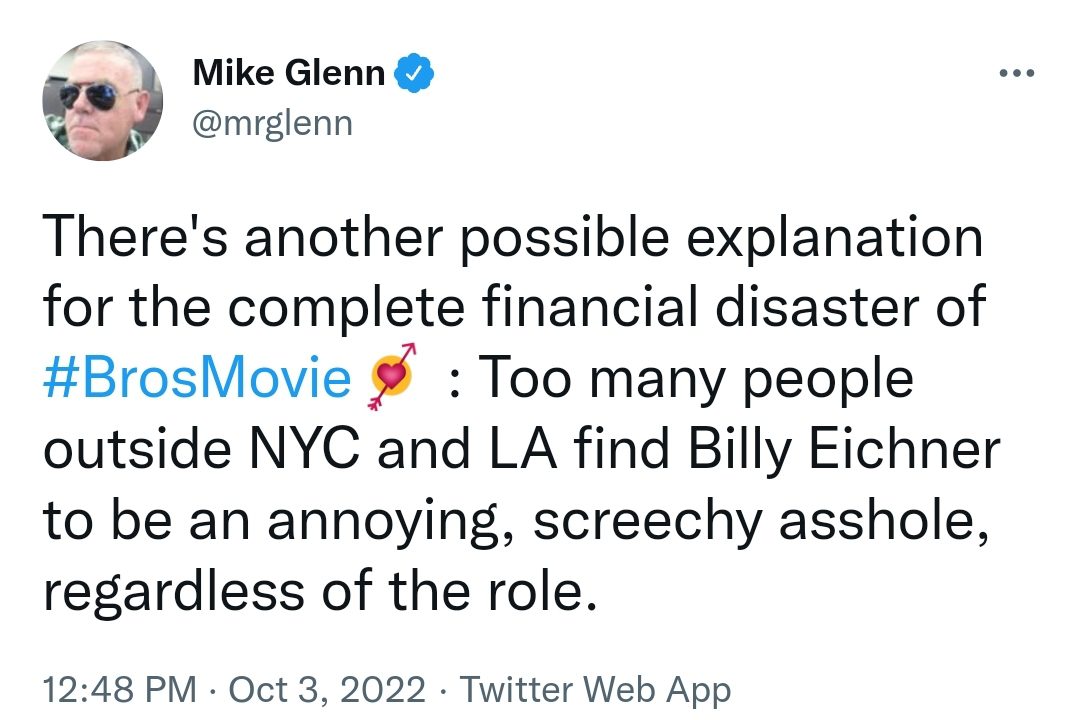 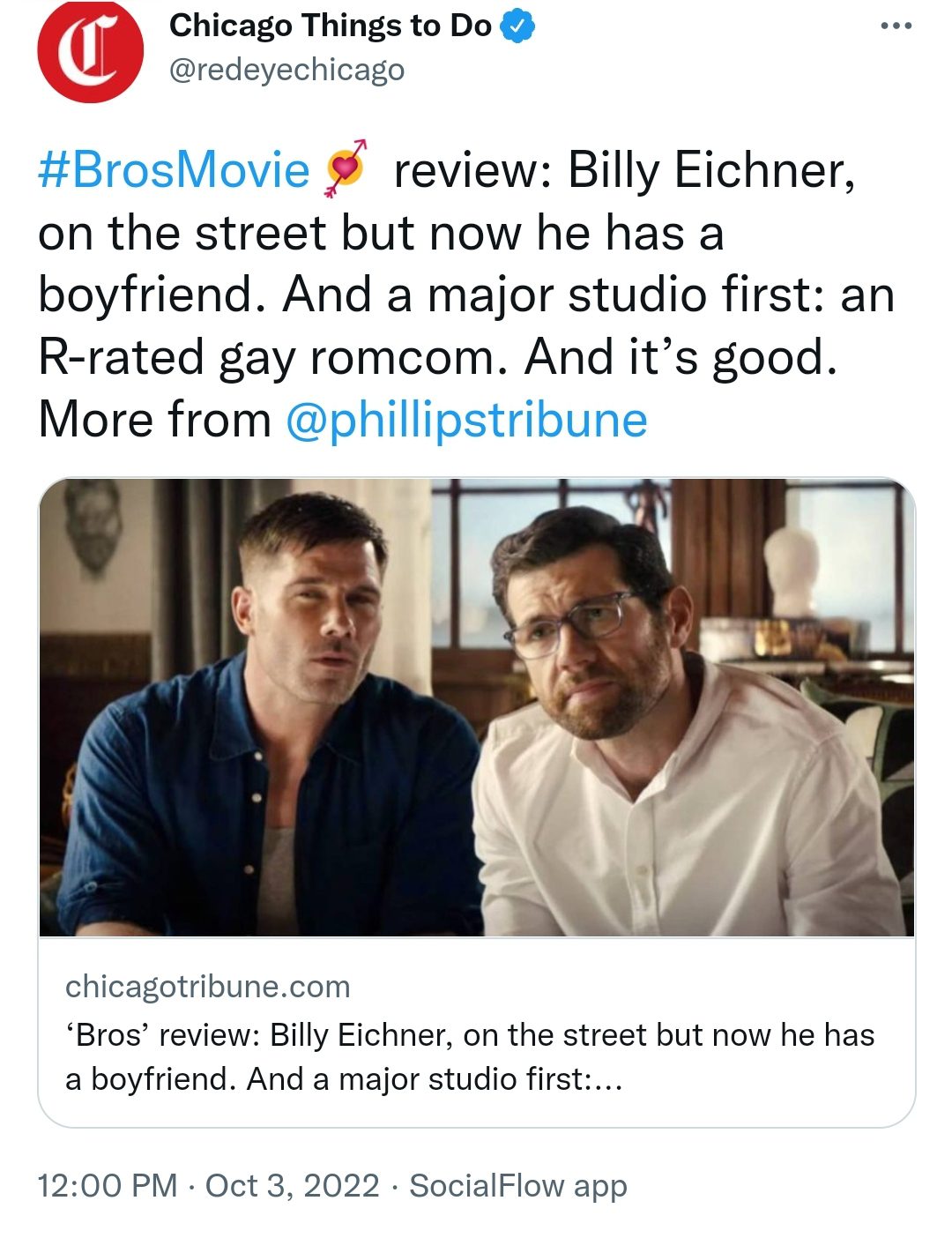 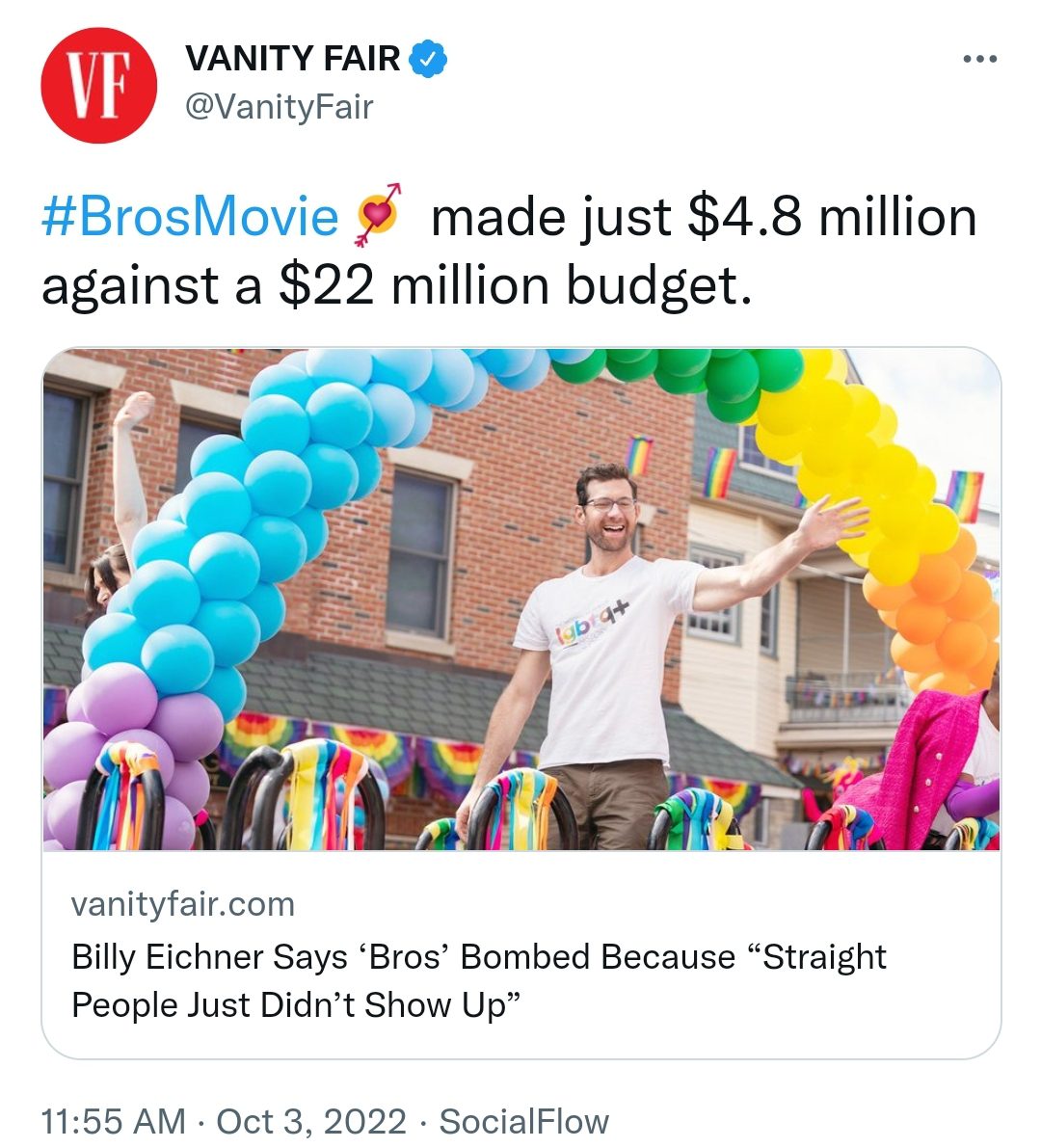 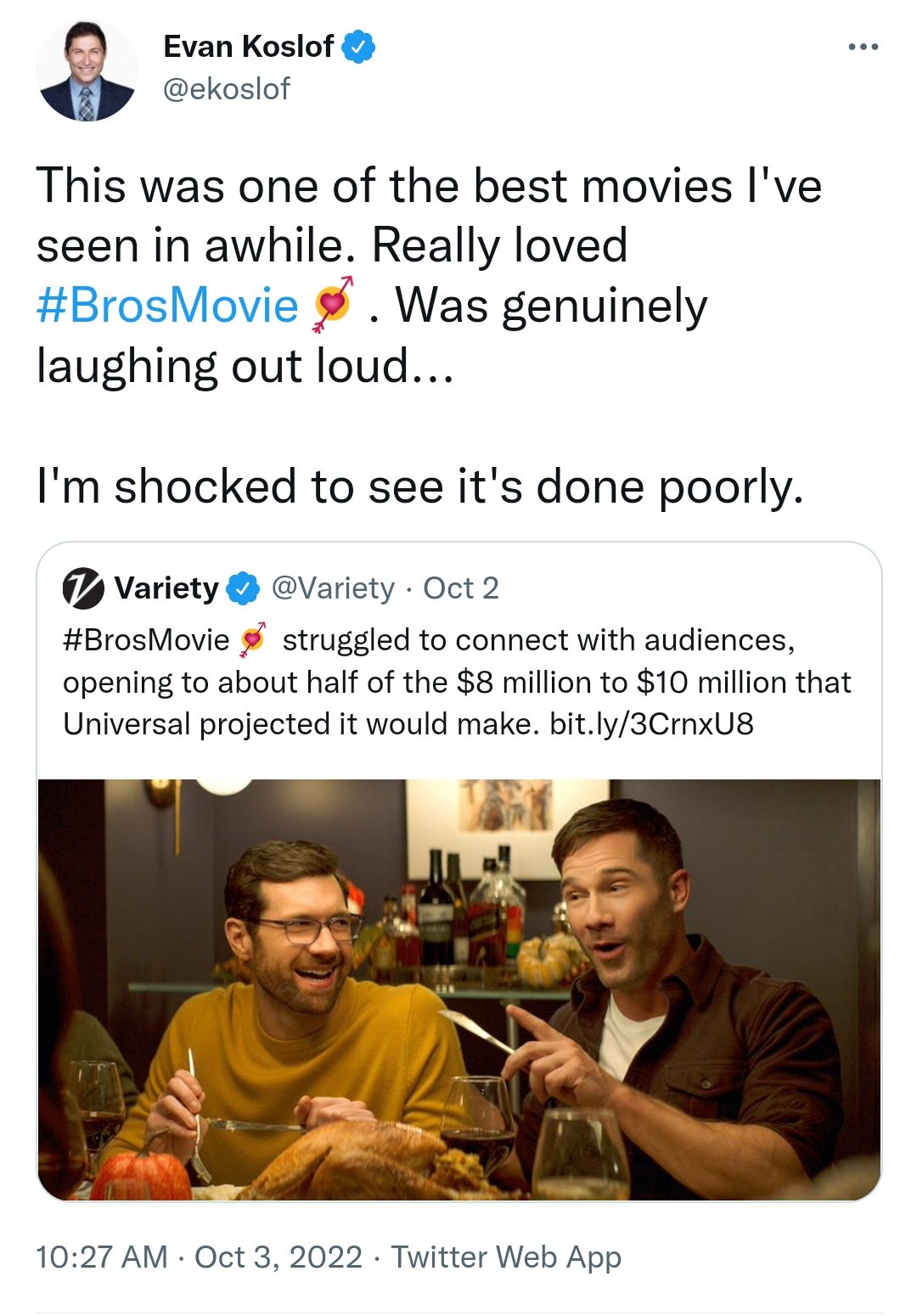 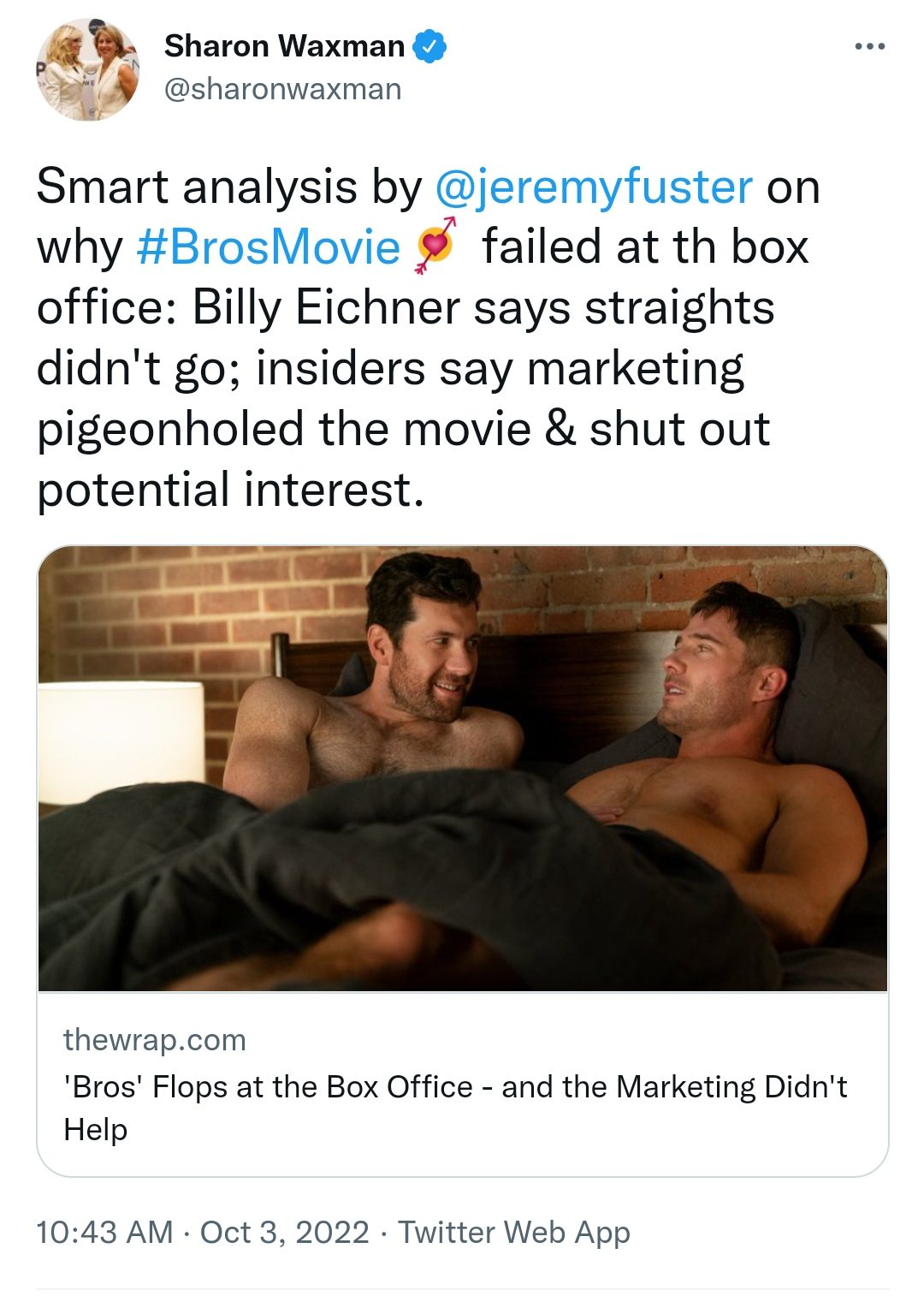 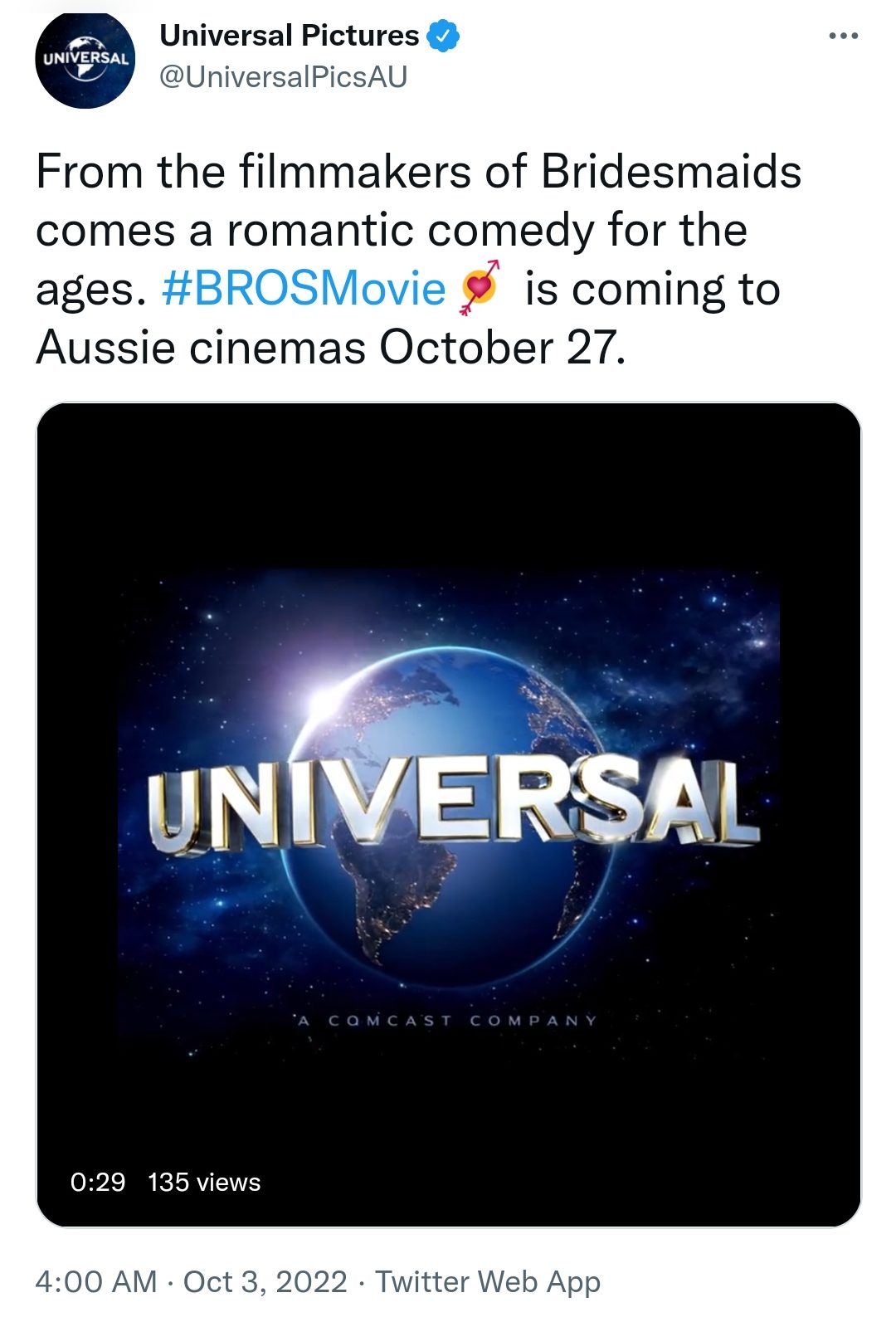 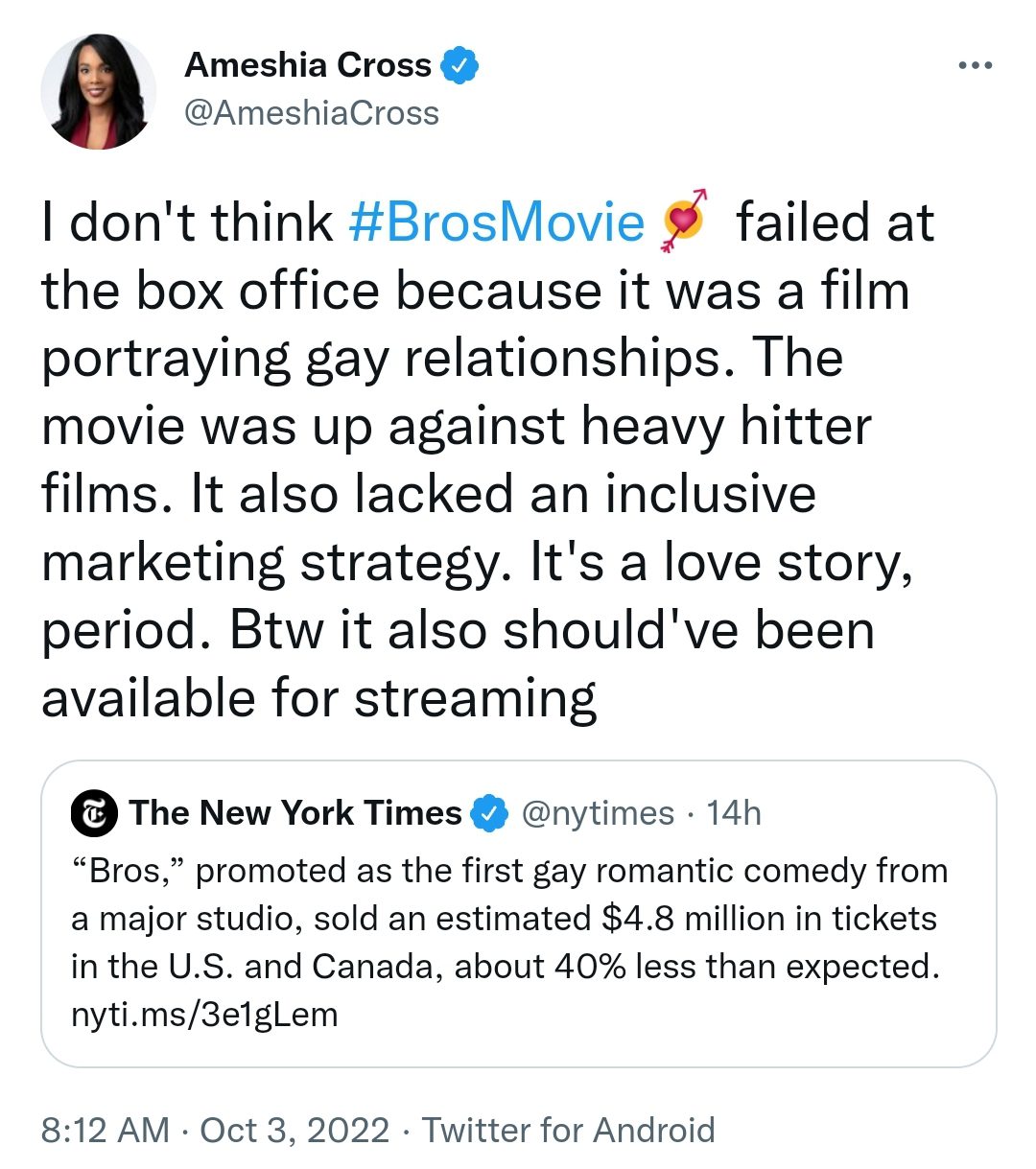 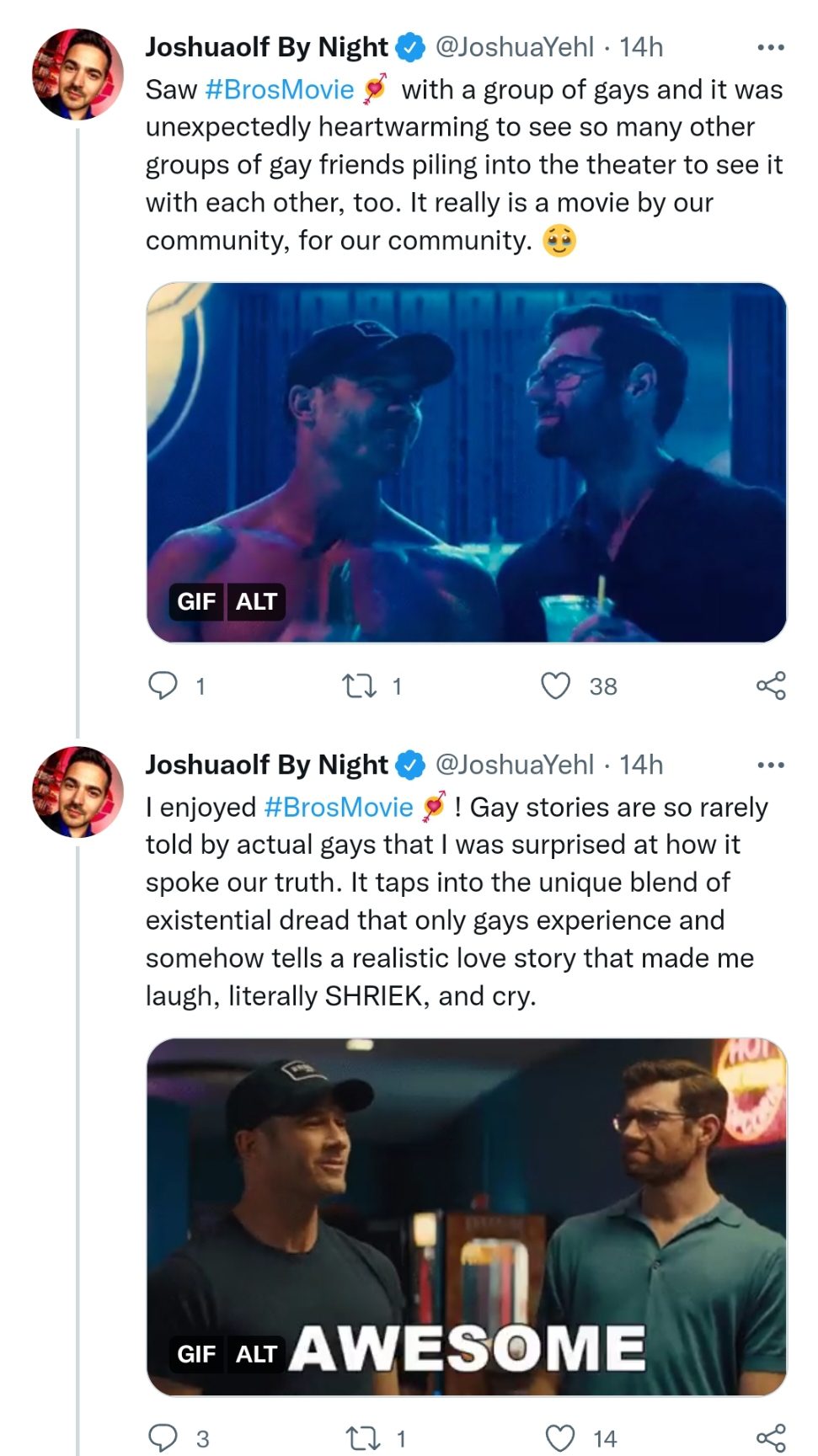 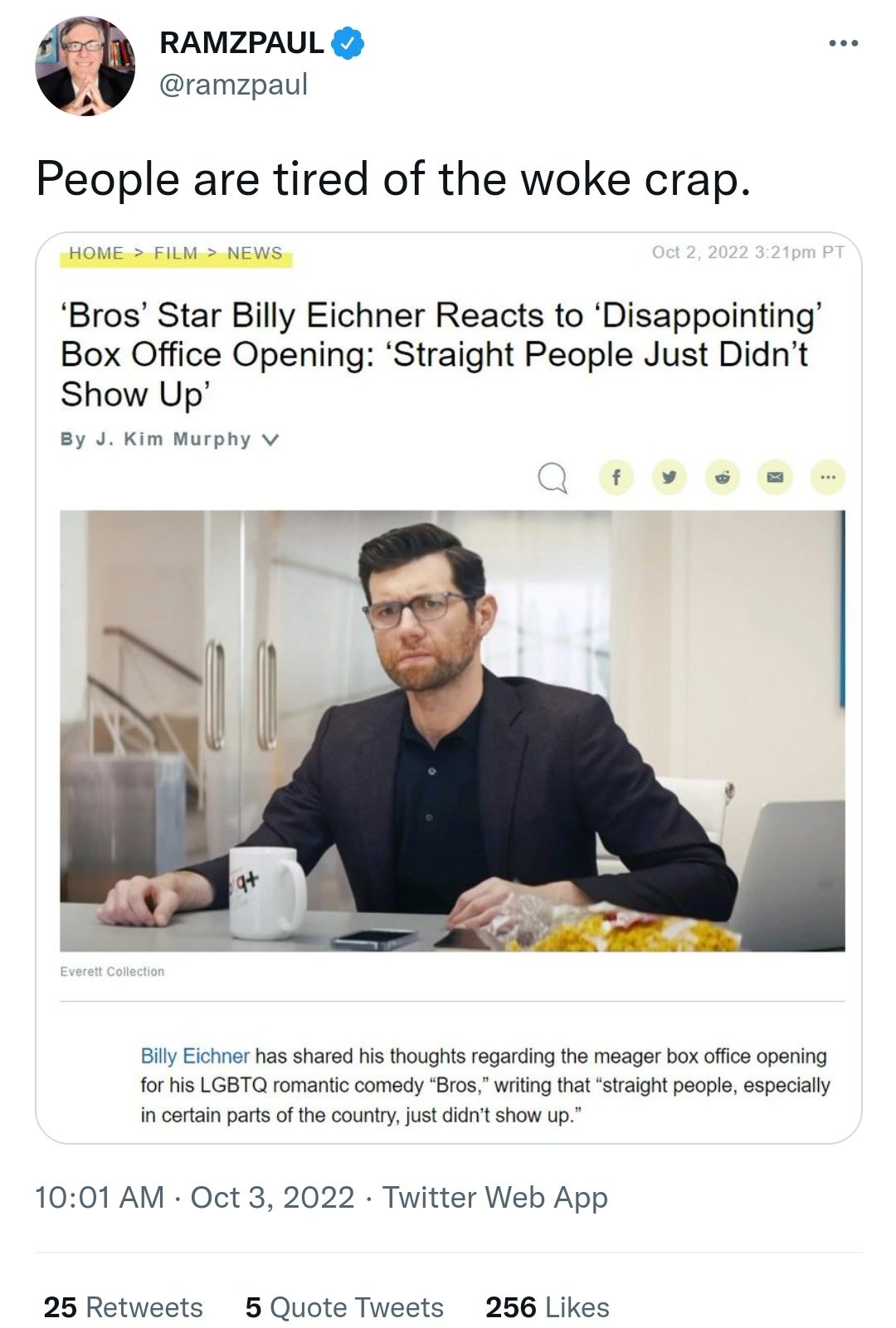 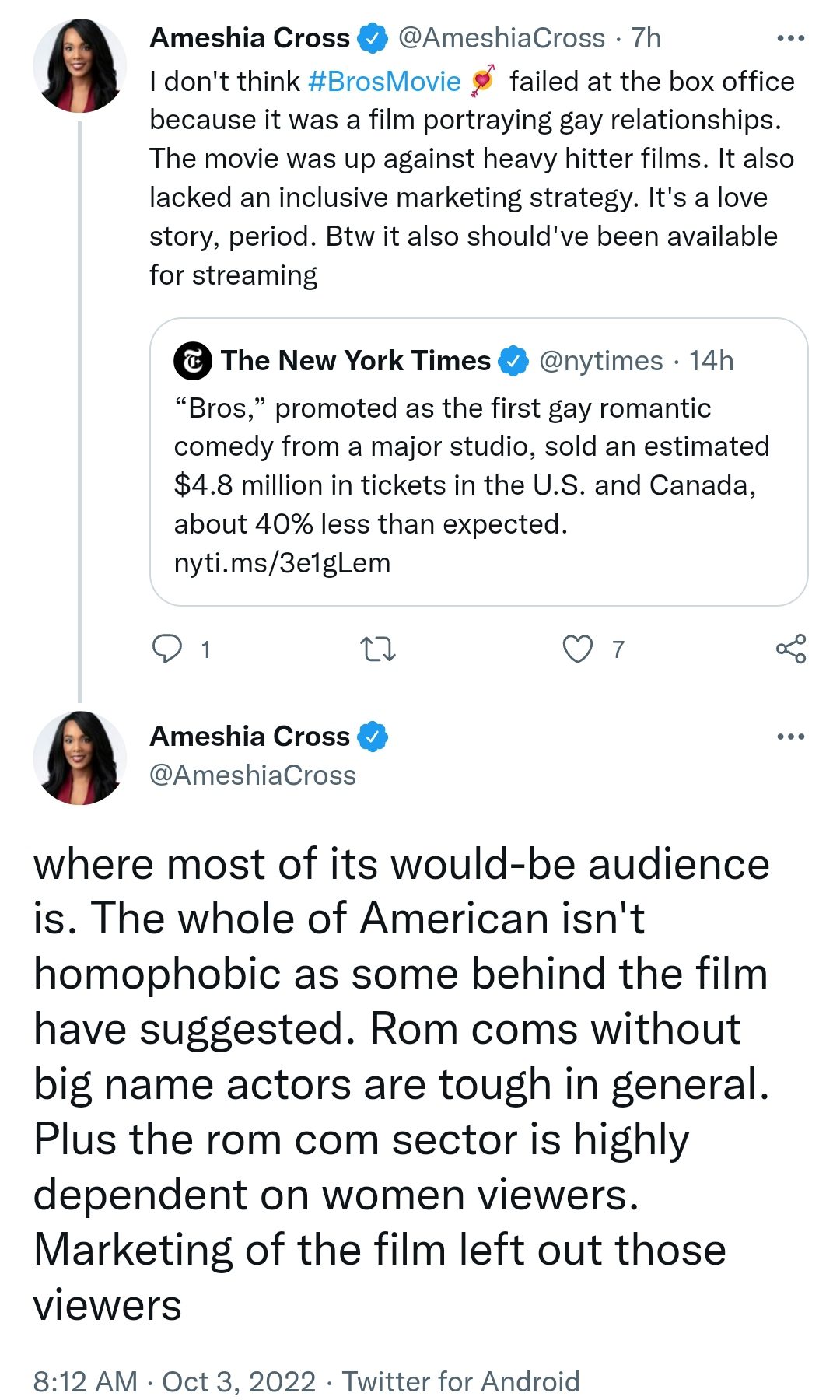 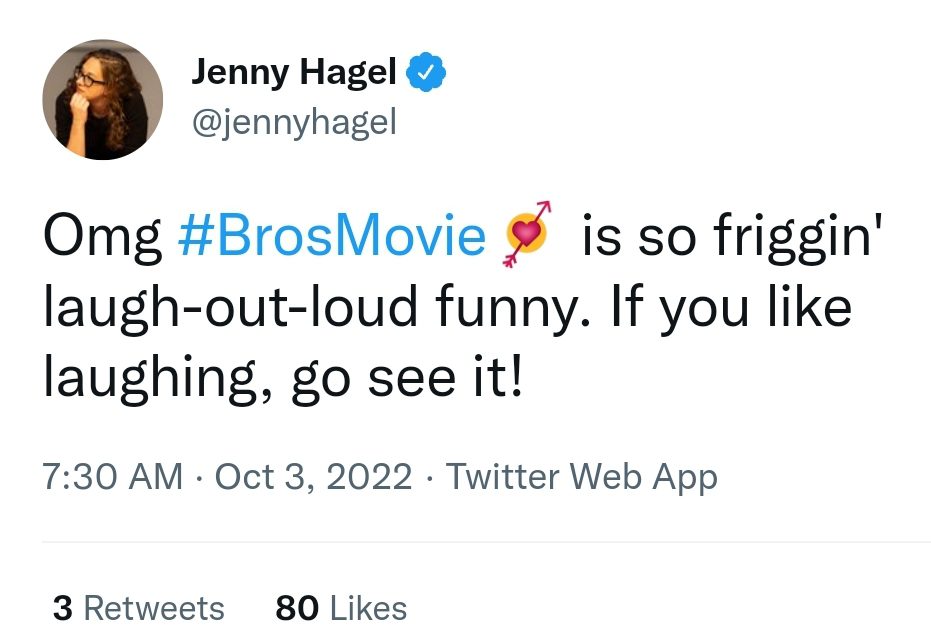 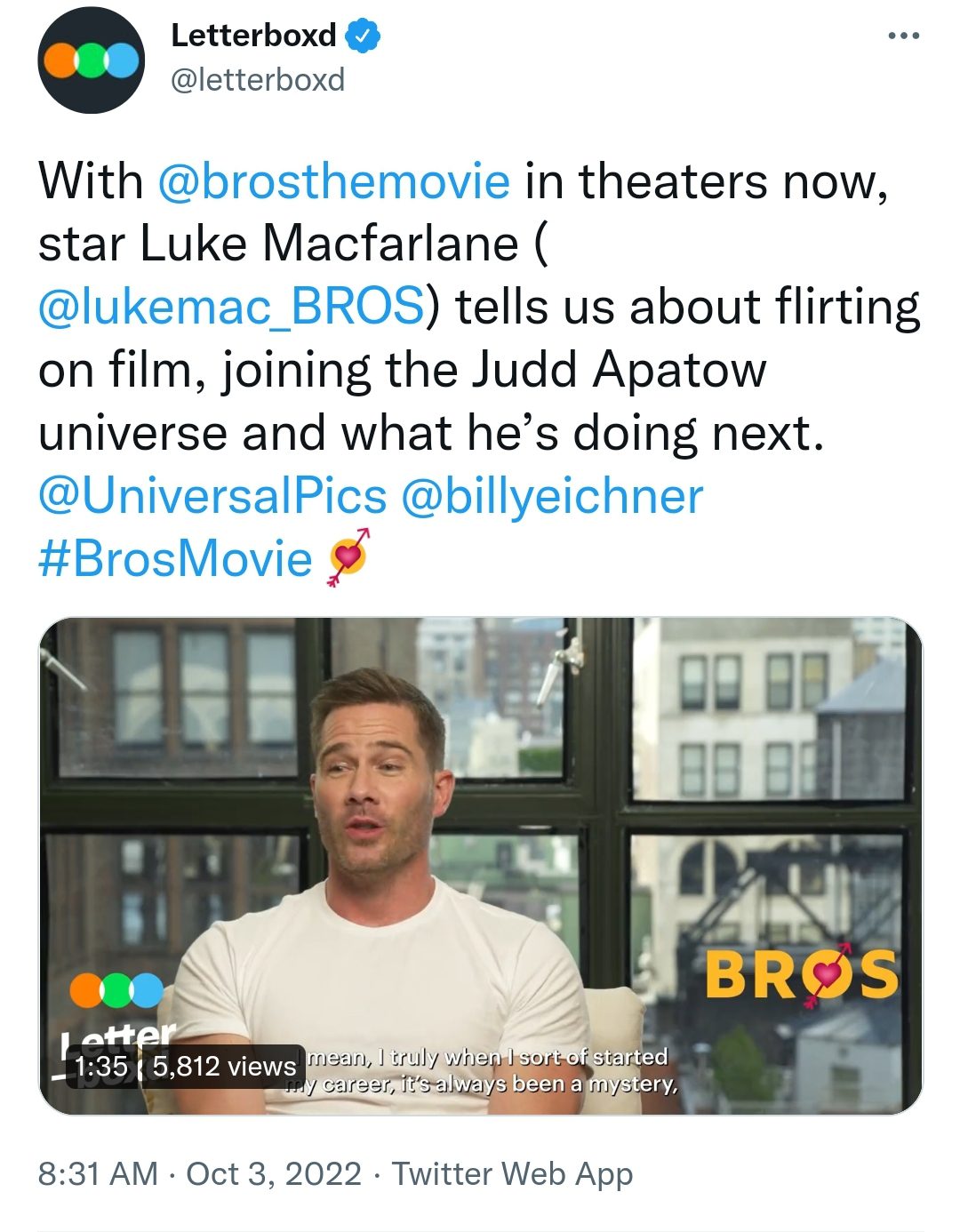 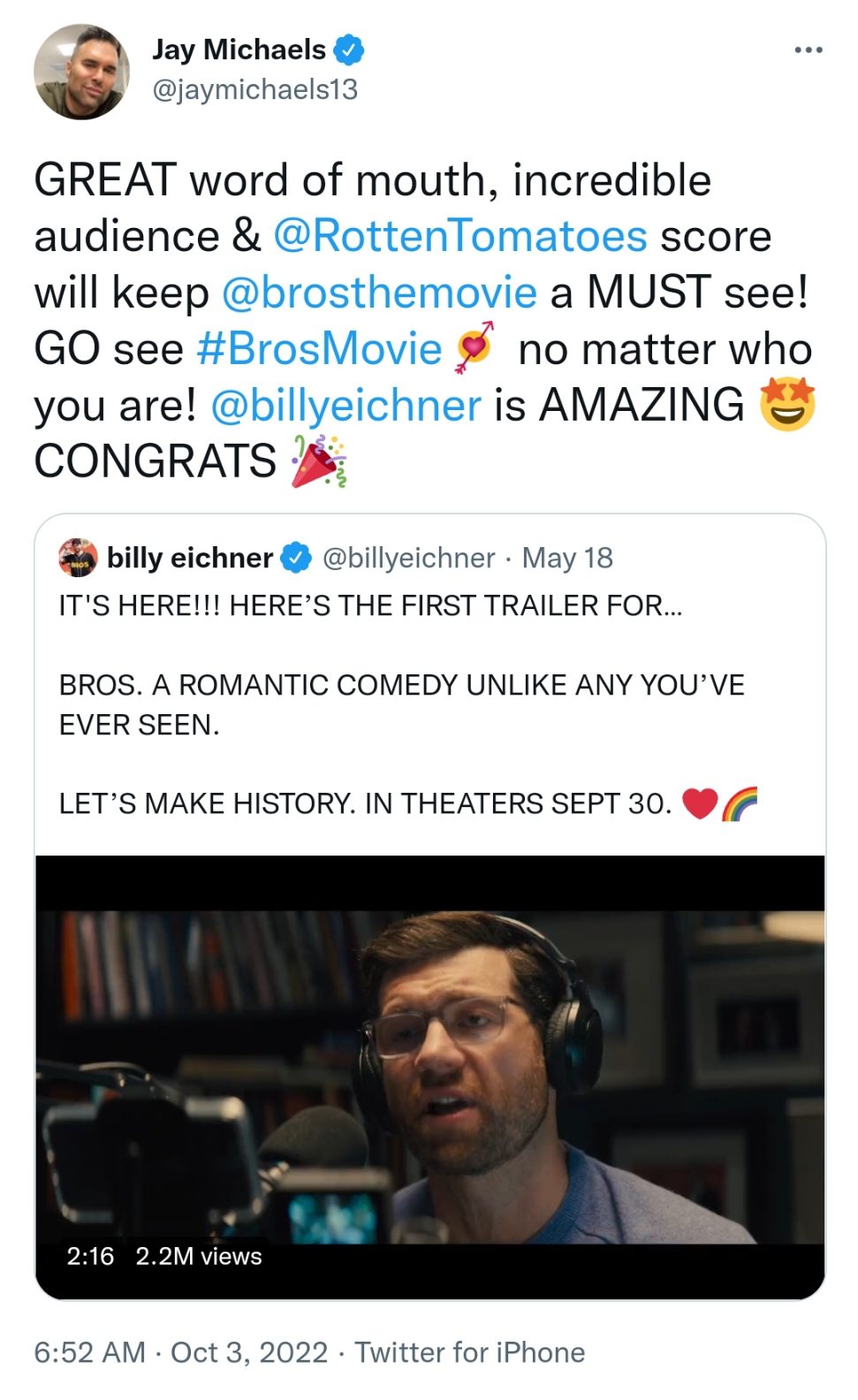 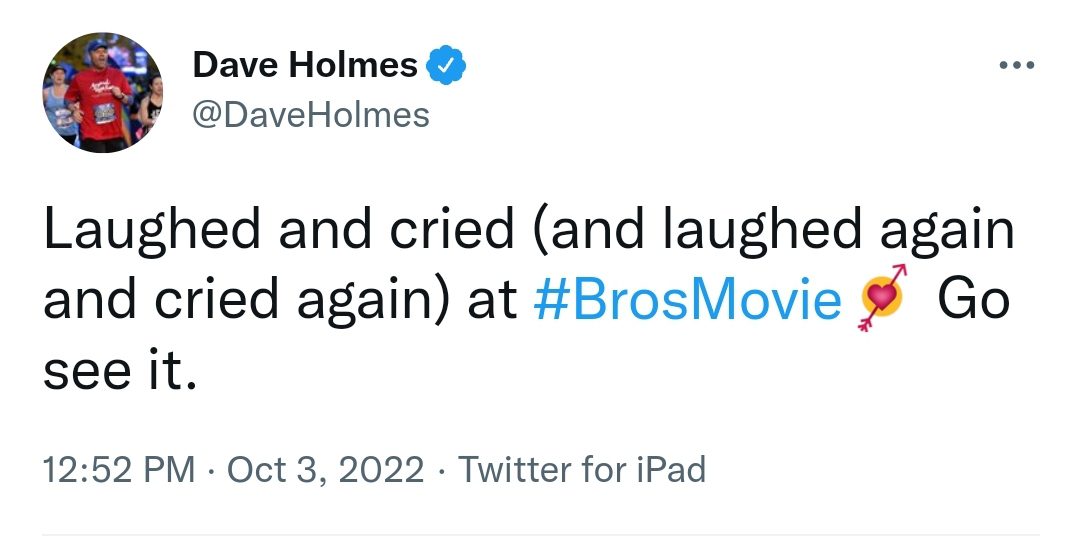 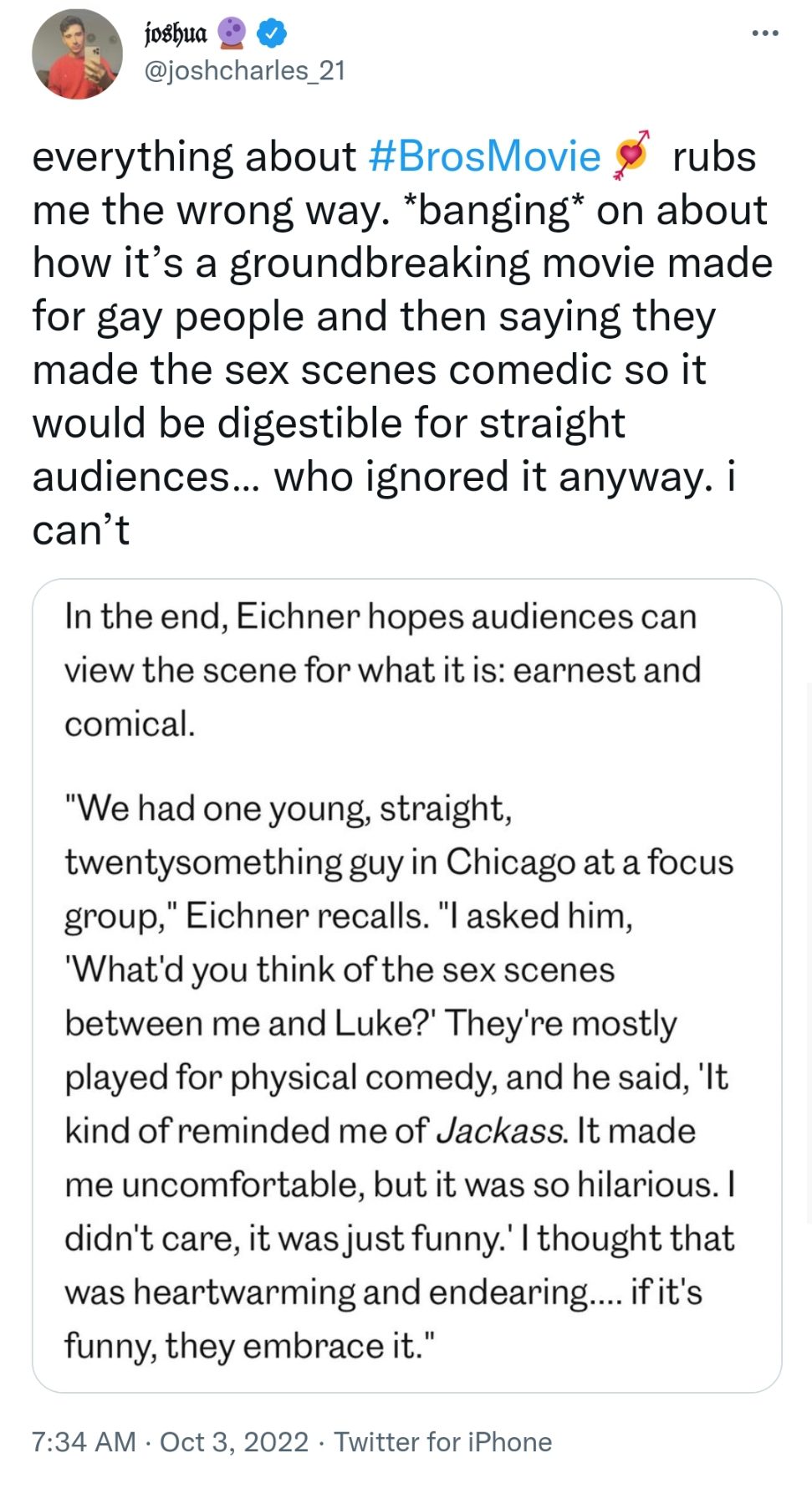